Just take a look at this Sunday’s Times of India as well as other titles in India (writes Mario García).

I am spending a week working here in Chennai, and I am somewhat mesmerised upon getting a copy of the Times of India delivered to my hotel room. Print advertising continues to be robust here. Not so in the United States, as the numbers I mention later in this blog post show.

Here is the front page of the Times of India, an ad for a sauce and mayonnaise product. The same is true for the second of a two-section newspaper, with the Chennai Times local news report. 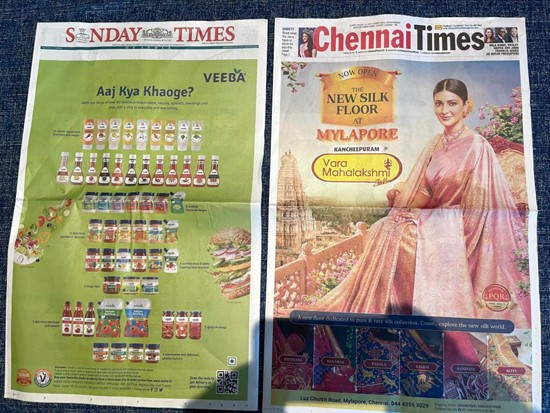 While advertising is definitely not as strong in many printed newspapers around the globe, it is obvious that in India, print advertising continues to bring in the revenue.

Once you open the first section of this edition of the Times of India, there is an interesting quarter fold behind which is the real front page, which by the way, includes a half-page ad as well. 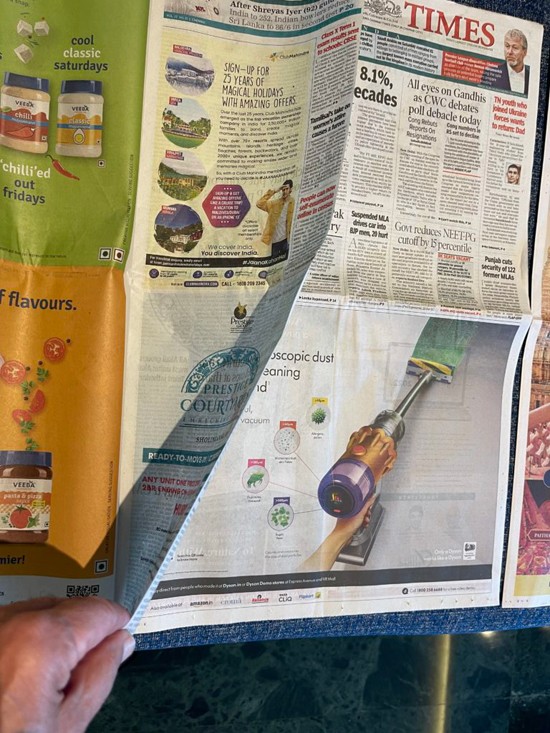 The advertising fest continues through almost every inside page: 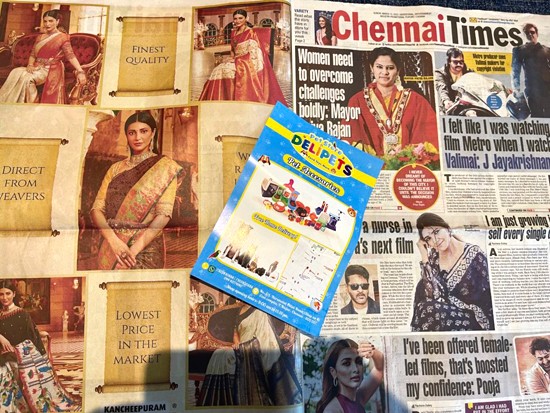 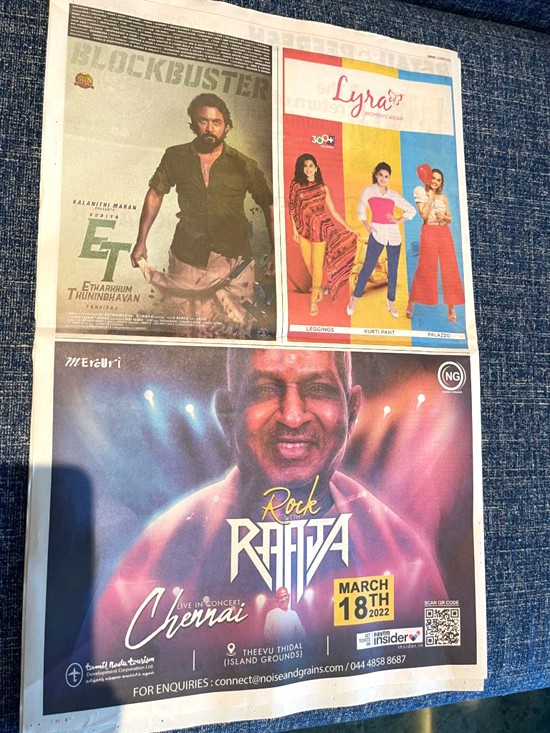 In Delhi, the Hindustan Times – a Garcia Media client – also sports a full front page ad in its Sunday edition, as well as a vertical ad as part of its real front page. 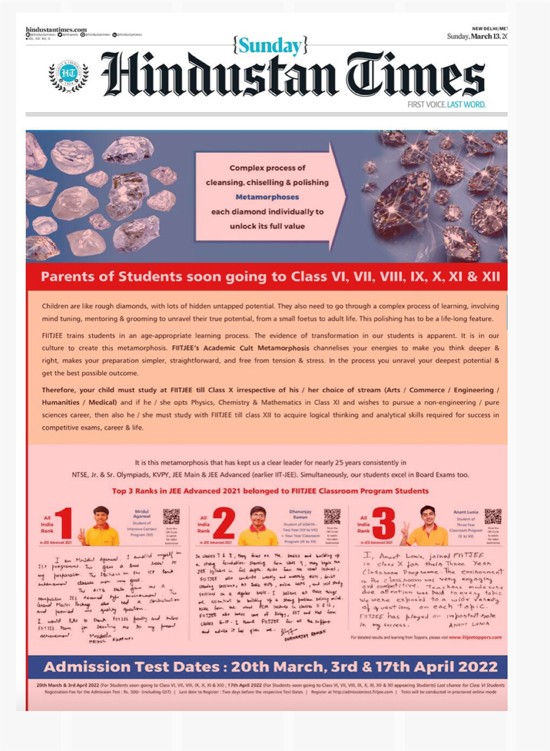 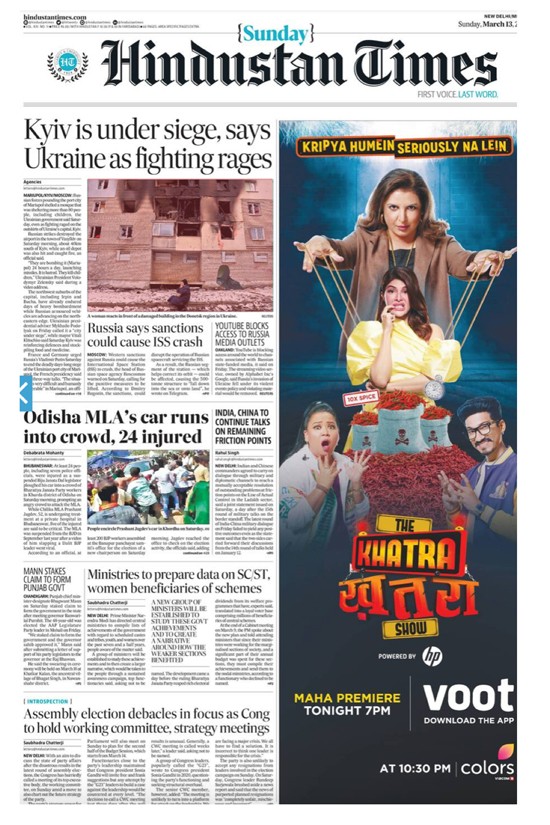 In Chennai, the leading regional newspaper, The Hindu (existing client) devotes half of its Sunday front page to an advertisement. The front of its Sunday Magazine supplement is also rich in advertising content. 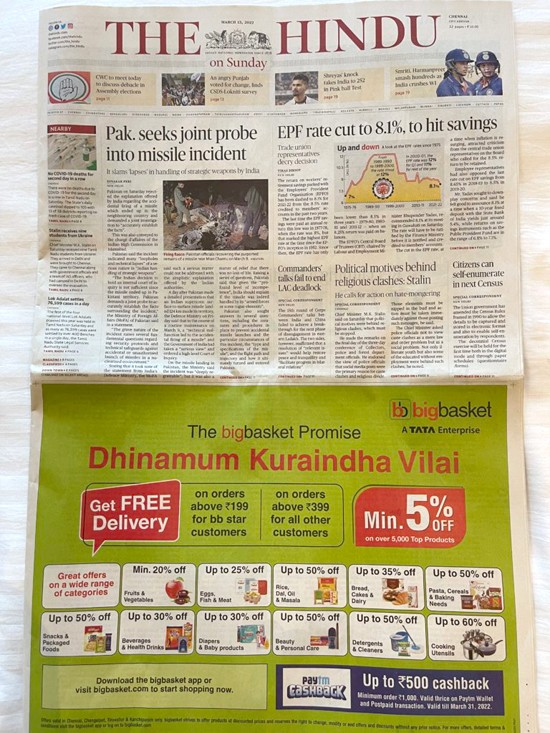 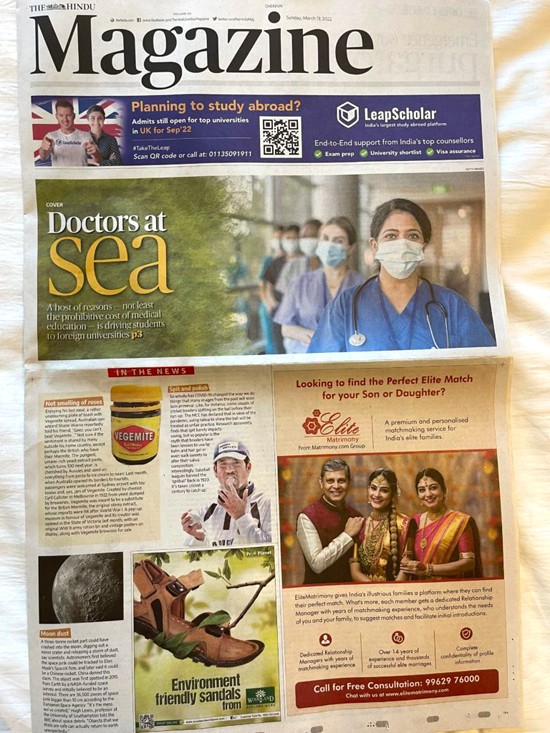 While print advertising is enjoying a strong showing in today’s printed newspapers, readers here also cling to their smartphones and other mobile devices.

According to a 2019 India Digital News Report, from the Reuters Institute for the Study of Journalism, Oxford University, It is a mobile-first market, with 68 per cent of the respondents identifying smartphones as their main device for online news, 31 per cent say they only use mobile devices for accessing online news. These figures are markedly higher than in other markets, including developing markets like Brazil and Turkey.

So, indeed, India is emerging as an overwhelmingly mobile-first, and for many mobile-only, media market for internet use broadly, and for online news use specifically. Advertisers are likely to follow.

Meanwhile in the US……

American newspaper publishers looking at this Times of India, as well as other Indian dailies, will probably feel a little envy.

According to a new forecast from GroupM, the worst may be yet to come for publishers in the US. GroupM expects newspaper advertising revenue to be cut in half once more within the next five years, bringing the total to $5.5 billion, down from more than $25 billion in 2012. 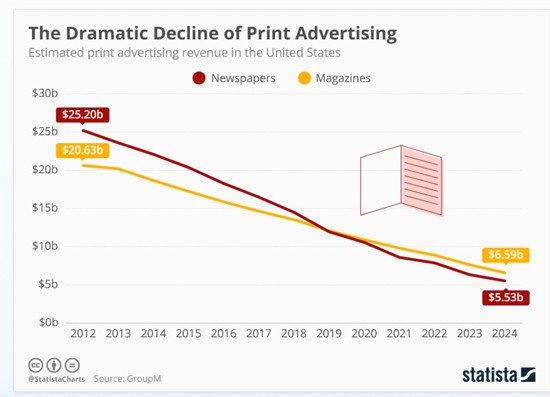 The numbers are similar from Pew Research

The total estimated advertising revenue for the newspaper industry in 2020 was $9.6 billion, based on the Center’s analysis of financial statements for publicly traded newspaper companies, down 25% from 2019.

“Digital advertising accounted for 39% of newspaper advertising revenue in 2020, based on this analysis of publicly traded newspaper companies. The portion stood at 35% in 2019 – but at 17% in 2011, the first year it was possible to perform this analysis.”

To balance the bad news in terms of print advertising, here is a graphic from Pew Research showing that advertising revenue coming from digital advertising in the US is on the rise: 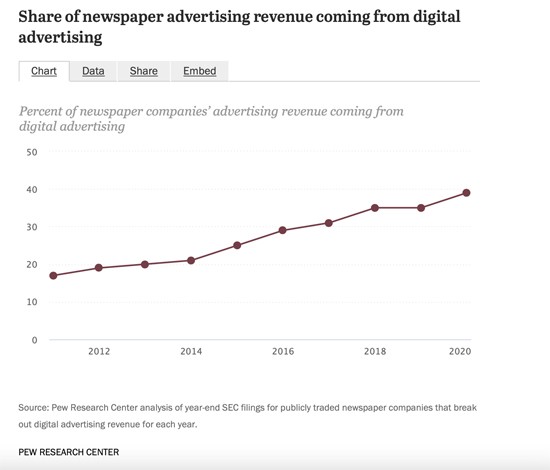 Not only is the share of digital advertising in newspapers rising, but also the size of those ads on homepage is increasing dramatically, as we have noted in one of our recent blogs.

A part of me feels good that these print editions are enjoying a healthy run as far as advertising is concerned. Just wondering how much readers actually like to have the news all wrapped up in advertising. From what I gather from my Indian colleagues here, more readers are consuming news via mobile devices and, indeed, advertisers in India too, are embracing digital platforms for their messages.

It may be a matter of time while these full front page ads continue to thrive. Until then, one can’t blame publishers in this tough economic environment taking advantage of an advertising trend that may not be there in the long run.