In the USSR, two of the largest papers were Pravda (meaning Truth) the official newspaper of the Communist Party, and Izvestia (meaning News), the paper of the Soviet government (writes Mark Ryan).

When explaining Pravda to an American audience in 1944, The New Yorker recalled a common Soviet refrain: “there’s no news in Pravda and no truth in Izvestia.”

Thirty years since the collapse of the Soviet Union, 24 years since Google was founded, and 15 years since the iPhone put the internet in billions of people’s pockets, we in Australia might find it hard to believe there are still places on earth where truth and news aren’t free and ubiquitous.

Yet, in 2022, we see the power of a state-controlled media in Russia, with most citizens there under the impression Ukraine is a Nazi-state committing genocide. This has been widely debunked everywhere but Russia, and among a handful of US elected officials.

There are heroic and brave efforts to break through Putin’s wall of propaganda like those of Marina Ovsyannikova, who interrupted a newscast with a poster reading “No war. Stop the war. Don’t believe propaganda. They lie to you here. Russians against war.” But Russians now live in a parallel reality to the rest of the world, as the last of the Russian free press is either shut down or flees under threat of 15-years in jail for calling the invasion anything other than a ”special military operation”. 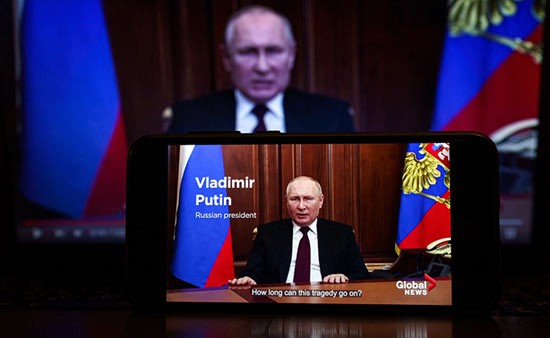 Russians’ understanding of events in Ukraine are being shaped by a tightly-controlled media. Image: Shutterstock

It is not just Russia. More than a billion people live behind the “Great Firewall of China”. Nearly 55 million residents of Myanmar live with strictly controlled press. Thirty-nine million Afghan citizens no longer have access to a free media, and while the Philippines has a vibrant media scene, Nobel-laureate Maria Ressa of Rappler is facing jail for criticism of the Duterte government.

It is almost a cliché to say that journalism has never been more important. But, as the more than 70-year-old patchwork of the rules-based order seems to be fraying, and anyone can post what they like online and have it go viral, it is undoubtedly true. And so, it is vital that organisations like the Judith Neilson Institute for Journalism and Ideas are there to help bolster the fragile Fourth Estate both here in Australia and around the world.

JNI has provided practical and financial support to journalists in myriad ways, including assistance to Australian journalists covering the invasion in Ukraine, which you can read more about below, fellowships for journalists in Myanmar and Afghanistan, investing in detecting disinformation during the upcoming federal election, building support for local media across Australia, and so much more.

The invasion of Ukraine by Russia, given cover in the Russian homeland by propaganda, should be a wake-up call for journalists and editors around the world to double-down on their efforts to seek the truth and deliver the news responsibly to their audiences. And for the public, particularly those living in the safety of Australia, it is now clear what can happen if truth and news are besieged.